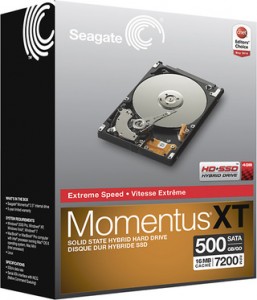 The new Seagate hybrid drives (Momentus XT 500GB) acts as a bridge between HDD’s (spinning magnetic drives) and SSD’s (Solid State Drives) in terms of performance, capacity and price. The external appearance of the drive is similar to any other laptop drive, which has a form factor of 2.5 inch and fits into the standard slot of ‘z’ height and 9.5 mm with SATA 2 interface. It has unique qualities internally and is quite different than the usual laptop drives. It has 7200 RPM spinning speed, 32 MB buffer and a solid state memory of 4 GB. Yes! The spinning hard drive has a solid state memory.

The extended buffer can retain data even after rebooting the drive, but the user cannot address the solid state memory as the memory is not visible to the user, hence the OS or the Software really doesn’t matter.  The controller of the drive itself identifies it by the Adaptive Memory used by Seagate, to get data or files frequently from the hard drives spinning portion. It puts it onto the 4 GB section of the solid section. The drive was originally designed to enhance the reading capacity but eventually it has shown good writing performance as well.

SDD’s and HDD’s were the only 2 camps in storage technology until now, which the users had to contend it to the external power manually; while the HDD’s had low storage capacity with low price. Drive-Hybriding concept was tried many times by Seagate and Samsung 2 years ago, but the results were not good to launch it, as one big issue was the OS support with 256 MB flash memory or the SDD’s, which did not obtain sufficient appeal, which resulted in significant drop in prices.

This second generation drive, combines solid state technology and usual normal technology. The solid memory of 4 GB is a Flash NAND, the one accustomed to seeing SSD’s and pendrives, except the Single Layer Cell (SLC) type to increase the speed. This drive uses 2 spinning platters for achieving areal density. The average power usage is 0.8 W at ideal state and 2.2 W during the writing and reading operation, which makes it better than the normal desktop 3.5 inch HDD, which consumes 6 W on an averagely. Seagate Momentus XT 500GB Hybrid Drive offers usable storage space of 465.76 GB when it is formatted, which is on the expected lines. This disk is all through the intense testing and it was found that it did not get over heated or did not become audible.

The new Seagate hybrid drives (Momentus XT 500GB) has added flash storage inside, to increase the speed of the drive over the standard drive in various scenarios. This second generation drive is the best hard disk in performance, budget and capacity. It will boost the speed of the hard drive, over SSD and the standard laptop drive, which has 5400 revolutions per minute. The performance is up to the mark!