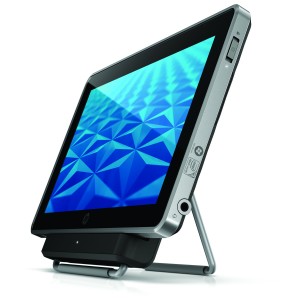 The HP Slate was first unveiled at the Consumer Electronics Show in January, where it failed to gain momentum at par with the Apple iPad. Later, HP re-jigged their product and launched the HP Slate 500 on October 22, 2010, projecting it as an enterprise market product. The 8.9” Slate compete with other similar consumer products from Apple, Dell or Samsung. Nevertheless, it can be a good productivity tool for on-the-road professionals.

The Hp Slate 500 may seem expensive at first, but its specifications and productivity make up for that. It can be an ideal tablet PC for professionals who are on a constant move and cannot be tied to a workstation or desktop. The Slate comes out as a sturdy, light-weight device with slick industrial design, which weighs just about 1.5 lbs (0.68 kg).

The tablet runs Windows 7 OS which can provide the professional with seamless productivity. With a Windows OS, the user has multitude of apps and software at their disposal, hence they can truly work away from their desk.

What is being seen as a weakness of the Slate is the lack of any specialized software for the touch-panel. The tablet doesn’t come with any other custom software and depends on the built-in features of Windows 7 OS for the touch-interface like the on-screen keyboard.  The HP Slate Digital Pen (included) can be used for taking notes which sets the tablet apart from other Windows 7 based ones.

On the connectivity front, the tablet has integrated 802.11b/g/n, Bluetooth ® 3.0 and HS combo. It also has a USB port, a SD card slot, integrated microphone, a combo-stereo headphone/microphone jack, a front VGA and a rear 3 megapixels camera and a docking connector. The dock (included) further enhances connectivity with two more USB ports, HDMI output and extra headphone and microphone jack.

The Slate comes with per-loaded Windows 7 Professional that helps in enhancing productivity along with providing a portable net-book-like experience. Also, the touch-screen interface is mostly lag-free, unlike other Windows based tablets sparing the professional the operational irritation. The Slate also takes input from an included stylus that the company calls as HP Slate Digital Pen. The official HP site boasts of the Slate having ’up to 5+ hours’ of battery life as well.

The HP Slate 500 comes bundled with a docking stand, a carrying case and the pen with a price tag of $799.

The Slate initially failed to shine through the glow of Apple’s iPad, but when it comes to connectivity, the Slate wins hands down. It has various other hardware advantages over the iPad as well. Where iPad runs on the iPhone OS 3.2, the Slate runs on a full Windows 7 Professional OS; hence one does not have to depend on proprietary apps and can choose from the already available wide variety of software and applications. One also gets the functionality of multi-tasking which is unavailable with the iPad. And where iPad has no camera, the HP Slate comes with two.

The parameter where Slate lacks is the touch-interface and 3G connectivity.

The HP Slate 500 is a good tablet which is suitable for an enterprise professional on constant move. It provides true on-the-road productivity, good connectivity and sturdy operating system. But the lack of a customized touch-interface may be a hindrance and also the higher price tag can limit it to enterprise users only. If it can be an iPad Killer, is up to the user.